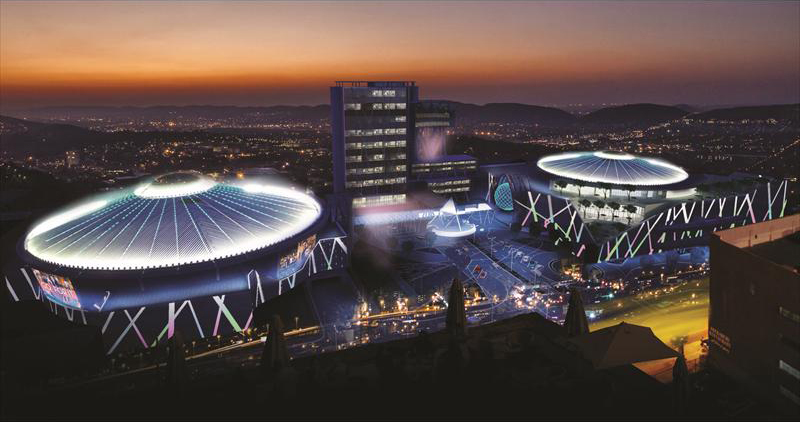 Posted at 14:54h in news by Central Square

“About 10 000 direct and indirect jobs will have been created during the constructions and the initial fit-out and start-up phase.”

The second largest casino in South Africa is well on its way to the grand opening on 1 April this year near Menlyn Maine. Media, members of the community, casino executives and Miss South Africa finalists gathered on the rooftop of the Sage Building on 2 February for an event celebrating this Sun International jewel. Time Square casino will be the home of 2 000 slot machines and 60 game tables.

Guests of the event were treated to a variety of canapés reflecting the variety of fine dining restaurants that will form an integral part of this development. The well-skilled executives of Time Square were also introduced to guests. General Manager of Time Square, Brett Hoppé, said construction was well underway and that two floors were already decked out with slot machines.

The development would be followed by an 8 000 seat arena in September 2017 and a hotel complex in March 2018. Before being appointed as the GM of Time Square, Hoppé was the general manager of The Boardwalk Complex in Port Elizabeth. He was also the general manager at Sun City in the North West.

This project is certain to benefit the community through job creation. Sun International spokesperson Michael Farr said: “About 10 000 direct and indirect jobs will have been created during the constructions and the initial fit-out and start-up phase.” Hoppé said he was proud to call Menlyn the new Sandton of Pretoria. “This will be the most exciting entertainment hub,” he said. “We aimed to embed ourselves in the community. We will never be able to be successful if it wasn’t for the support of the community.” He said he was on the construction site every day and watching the progress was exciting.

The casino roof spanned 85m at it’s widest point and covered 10 000m². During the construction, the casino even managed to gather a South African record for the longest continuous pour of concrete which was 1.550m³ over a period of 18 hours poured from 260 cement truckloads.

Laid out top to toe, the 7.5 million bricks being used in construction would cover more than the distance between Johannesburg and Cape Town. “Time Square is the epitome of world class, from the variety of games, pioneering floor layout and advanced customer interaction technologies,” said new slots manager at Time Square, Biano Marini.